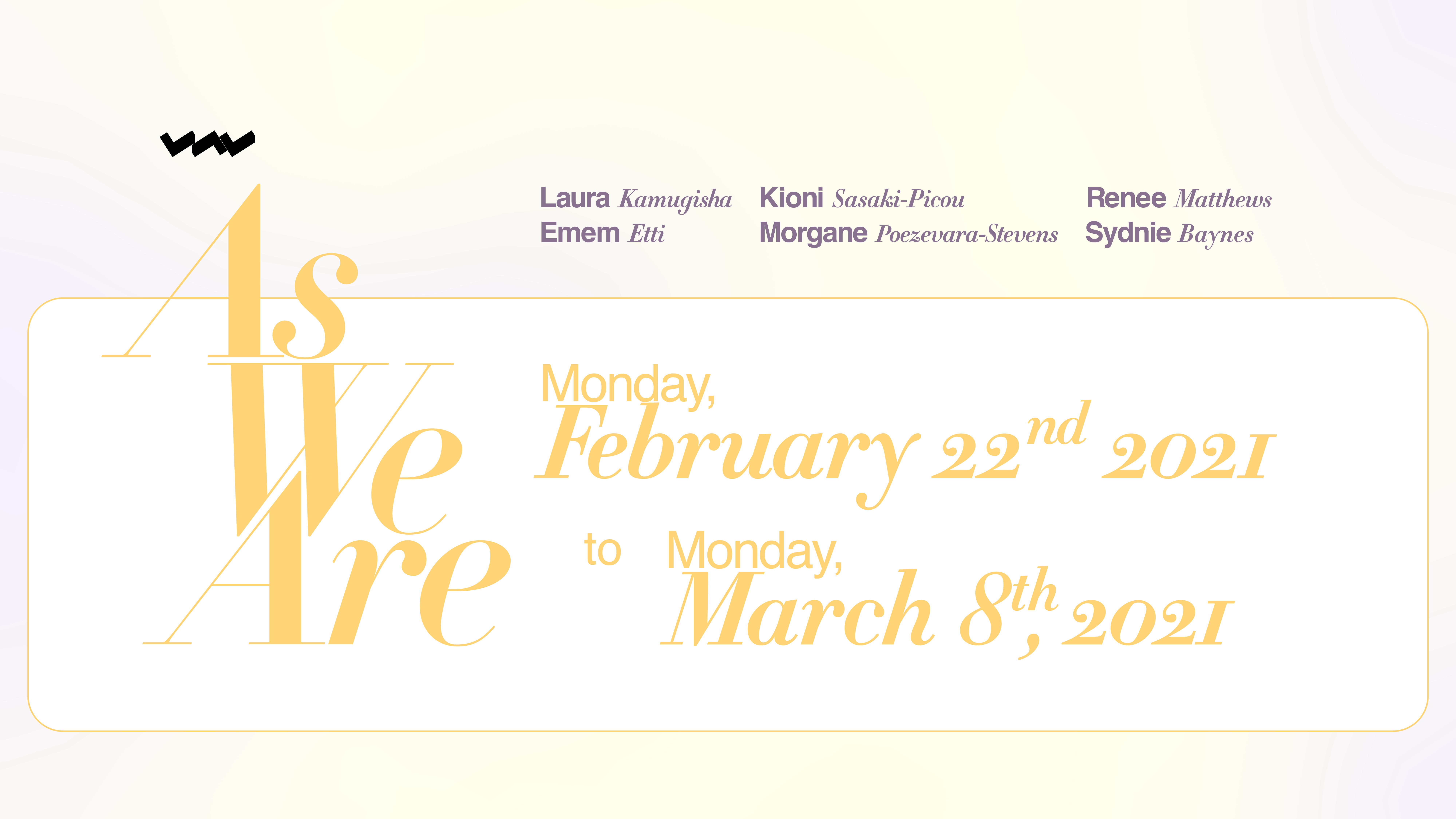 What defines a black person? Is it a physical trait? Is it the amount of melanin in their skin or is it the number of Fresh Prince of Bel-Air lines they can recite? There is no definitive answer to that question as the black identity is multi-layered in identities and personal experiences.

Featuring works of photography, visual art, and video montage, As We Are brings together a collective of rising black artists. With the notion of self-exploration and sub-themes of acceptance, community, and vulnerability, the artists express in their works their unique voices and experiences they believe encapsulates the many realities of their black identity.

Being black goes beyond crossing a checklist of characteristics that would certify the obtention of the fictional black pass. Blackness is a unique experience and black individuals are meant to be cherished and unapologetically accepted for who they are.

We would like to begin by acknowledging that Concordia University is located on unceded Indigenous lands. The Kanien’kehá:ka Nation is recognized as the custodians of the lands and waters on which we gather today. Tiohtià:ke/Montréal is historically known as a gathering place for many First Nations. Today, it is home to a diverse population of Indigenous and other peoples. We respect the continued connections with the past, present and future in our ongoing relationships with Indigenous and other peoples within the Montreal community.

Marie-Chantal’s life is split in two. She has lived half her life in Rwanda and the other half in Canada. She is a political refugee and my mother.  Hyphen (Trait d’Union) explores the notions of identity, attachments and the concept of “home”.

‍Laura Kamugisha is a filmmaker of Congo-Rwandan origin based in Montreal in Canada. Her films explore notions of cultural identity, memories, and intergenerational baggage all through visual poetry. She has a bachelor's degree in Film production at Concordia University and would describe her projects - and herself, as sensitive, stubborn, and intuitive. Her works have been presented at various festivals throughout Quebec and internationally, including the Festival Nouveau Cinéma (FNC), the Montreal International Documentary Festival (RIDM) and Arica Nativa Film Festival. She is currently working on two short fiction films while interning at Midi La Nuit, the double Academy Award nominated production company, founded by Annick Blanc and Maria Gracia Turgeon. Hyphen (Trait d’Union) is her first documentary.

My hair has the potential to be the determining factor of the way I am seen. Too black or not enough. The curls that stretched from my roots shout at the bystanders, “HEY I’M BLACK.” While hearing about the pencil test taking place during the apartheid in South Africa, I was brought back to elementary school. Although raised in one of the most multicultural cities in the world, Toronto, I was still one of the few black kids in the class, let alone the school. So, you could say, I stood out from the crowd. Usually, I would go to school with my hair undone and would be the subject of entertainment for the other kids. Alike the pencil test, they would run pencils through my hair and instead of seeing if one could stay, they’d question how many could fit. Without knowing, they made sure I knew I was different. This was fun when I thought they were playing with me. But then I realized they were playing with me, as you do with toys. For this work I wanted to play around with the innocence of childlike behavior but with the ignorance of the insensitivities. A recall of mine and other black kids' experiences growing up in a white environment. I used colorful pencils as a nostalgic material from classrooms and gave each model the hairstyle they rocked when they were younger. Whereas the quotes come from conversations with each model around their hair being reason of disconnect.

Kioni Sasaki-Picou is a Toronto born photographer currently based in Montreal with her main tool being a 35mm camera. Currently she is working towards obtaining her Bachelor of Fine Arts at Concordia University in hopes to develop technical and curatorial skills. Throughout her work you will see consistent themes of identity through race, gender and representation of the black body. Being of Japanese and Trinidadian descent, Kioni uses her experiences and conversations with others to expand spaces for bodies shamed or misrepresented by society. She looks to explore her personal and others relationship with themselves in regards to race. Kioni hopes to create to give those comfort who resonate with her work as well as aid the growth of the black creatives community. She believes greatly in the power of community and views it as a necessity throughout path of healing.

This installation is the culmination of an experiment designed to explore the minds of black artists. A series of emotionally provoking questions surrounding the topics of identity, safety, love, and community are given as prompts for self-reflection. Throughout the question period, subjects are not allowed to talk and can only respond via the materials provided. The video documents the emotional labor of the subjects and their creative processes.

Renée Mathews is an interdisciplinary artist with a practice that taps into drawing, sculpture, collage, writing, photography, and movement. Driven by an insatiable and often childlike curiosity, her thoughts and therefore her work tend to revolve around concepts of time, spirituality, and inner worlds. Born in Toronto and raised in Mississauga, Renée now lives in Montréal where she is pursuing a BFA in Art Education at Concordia University.

‘Untitled Anonymous’ is an exploration and documentation of being. The photo series dives into vulnerability, shared identity, and fragmented-self. Identity has always been a prevalent topic within the Black community, and I myself, have struggled with identity and a sense of belonging. ‘Untitled Anonymous’ extends this conversation into a video medium and challenges the audience to explore what ‘self’ is, and how we present self to the world. Conceptually, I wanted to explore realms of afro-surrealism and absurdity within this series.

Emem Etti is a Nigerian born, Vancouver-raised filmmaker and photographer currently undergoing a BFA in film production at Concordia University. As a femme growing up in a traditional Nigerian home in Canada, the dichotomy between the two cultures fueled various projects she has taken on over the past few years and further pushed her to pursue storytelling in the form of visual arts. Emem strives to create work that challenges the notion of black portrayal, femme representation, and femme-produced films as well as explore the realms of Afrofuturism, surrealism and expanded cinema. Although specializing in fictional art, Emem also uses videography and photography to document various forms of collective human experiences.

Kinks and coils is a performance art piece I staged sharing audio recordings of interviews of black people who have experienced texturism in social and work contexts. During the recounting of these stories from black people of diverse hair textures, shades and cultural heritage, I set up a hair relaxing performance. In preparation for this hair straightening process, I bought Spray it Straight from the ethnic hair section at a big box pharmacy. I spray and tare at my scalp, brushing through my curls. Eurocentric beauty ideals go so far as to police the curls, kinks and coils that braid black people’s history into crowns.

Morgane Poezevara-Stevens is a bi-racial, black, woman (she/her) working in Montreal, these identities intersect and shift my perspective when approaching all subject matter, she can only speak from her experience as a settler on this land. She is an Art Education student working primarily in acrylic painting as well as sculpture and performance art. In her performance art practice, she enjoys creating immersive experiences for the viewer in which everyday scenarios are restaged to understand the perspective of minority’s reality’s, exposing my socio-political views on contemporary issues within the scope of western colonial politics. Topics such as; the sociological construct of gender binaries and egocentrism have been treated in her most recent performances. This practice intertwines with her interests in sculpture and recreating everyday objects that hold oppressive power, such as I.D cards for example. Currently, she has been drawing attention to the notion of privilege and popping the delusions created by socio-economic status. More specifically, treating the urgency of the climate emergency and global pandemic we are currently living through and the role socio-economic class plays in survival.

Sydnie is an artist born and raised in Montreal, Quebec. She’s a graduating student from Dawson College in Cinema Communications, currently studying Film Animation offered by the Mel Hoppenheim School of Cinema. Sydnie’s work as a visual artist reflects her interpretation of whimsicality, by her consistent use of fine lines and colours. Sydnie’s projects help her express herself in times of questioning by allowing her to showcase how she sees herself, regardless of what her physical self may resemble to others. Consistency shows in Sydnie’s art through experimental elements, and recurring images of the female body. Sydnie’s intentions conclude becoming more involved in the artistic community in hopes of creating stronger ties and bonds with other locals to collaborate personal projects.